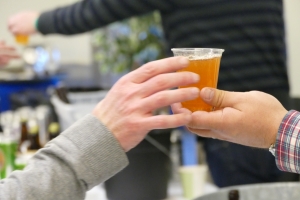 Brewing has become a major source of revenue for the New Hampshire economy, however some at the 2018 New Hampshire Craft Brew Conference fear over-saturation of the market could put some local breweries out of business. "Be something unique, be a place that people want to go," said keynote speaker Peter Bouckaert.

Rain poured all morning on Friday, Nov. 2 as attendees arrived at the Executive Court Banquet Facility in Manchester for the second annual Craft Brew Conference. The rain did not stop brewers from all over New England from converging on the conference to learn more about their shared passion for brewing.

The conference, which was geared toward industry professionals but still welcome to hobbyists, featured informational breakout sessions, lunch, beer sampling, and ample networking throughout the day. The sessions allowed individuals to hone their craft and learn how to make their business better.

The conference began with opening remarks from keynote speaker Peter Bouckaert, brewmaster at Purpose Brewing and Cellars. Bouckaert discussed the importance of the craft brewing experience for customers and that each brewery must strive to be unique. With many craft breweries springing up, creating a unique experience for customers is sound advice for those just starting out in the industry.

“Feedback is still pouring in from attendees and vendors alike raving about how successful it was,” said executive director of the NH Brewers Association CJ White. “It truly exceeded many folks’ expectations and they were blown away by the interest, sense of community, and interactions they were able to make throughout the day.”

Sessions ranged from marketing to the science of brewing and even employee management. Those in attendance were able to focus on specific topics they wanted to learn and attend sessions related to that topic. Notable sessions included “All About Malt” featuring keynote speaker Paul Bouckaert, “Brand Story Telling” with New England Guinness Brewery ambassador Mike Reardon, and an interactive sensory panel which was designed to teach brewers to promote quality and consistency. The sensory panel featured quality specialist from Allagash Brewing Co. Hannah Johnson.

Beer sampling was abundant throughout the event, allowing attendees to taste what their colleagues were brewing. The wide variety of exhibitors at the conference gave attendees a full look at the range of systems needed to make a local brewery successful.

A brewery goes far beyond just the craft of making beer. Insurance companies, POS systems for registers, and labeling companies were just some of the exhibitors in attendance and are all important aspects of the business of brewing. A brewery is a business and in order to be successful and keep customers coming back, must run smoothly on the business side as well as the production of a quality product.

One speaker noted a bad experience at one brewery could turn someone off to craft beer. Not only is this unfortunate for the brewery that gave the poor experience but also for the rest of the industry which just lost a customer as well. The industry must collectively be doing well in order for anyone to be successful. The market is full of competition but requires collaboration.

The 2019 New Hampshire Craft Brew conference is already in the works, and those in the brewing community can be on the lookout for more information coming soon.

A Passion For Music

Every summer hobbyists and professionals from around the world gather at the University of New... Read More

Website developers continue to be sought after by companies of all sizes as web-based services... Read More