Carol Niewola is a graduate of Michigan State University with a Bachelor’s of Science in Civil Engineering and has worked in the aviation transportation industry since 1989.  Her career has included time as an airport engineer, airport planner, and project manager for a number of New England airport consulting firms, as the airport manager for the Auburn-Lewiston Municipal Airport in Auburn, Maine, and as the senior aviation planner for NHDOT/Bureau of Aeronautics for the last 12 years.  In her role with the State of New Hampshire, she manages the FAA’s Airport Block Grant Program providing project and grant oversight to NH’s eligible airports.  Her other duties at the State include programming airport capital improvements, safety inspections at new and existing airports, capital project oversight for NH’s aircraft rescue and firefighting training facility, and unmanned aircraft systems oversight and education. 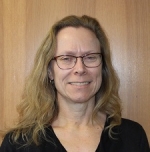