Dr. Bouton is the CEO of Vyasa Analytics, applying novel deep learning approaches for enterprise clients. Previously, Dr. Bouton was the CEO of Entagen a software company founded in 2008 that provided innovative Big Data products including Extera and TripleMap. Entagen's technologies won numerous awards including the "Innovative Technology of the Year Award for Big Data" from the Massachusetts Technology Leadership Council in 2012 and Entagen was recognized as a Gartner "Cool Vendor" in the Life Sciences in 2013. Entagen was acquired by Thomson Reuters in 2013. Prior to his role as the CEO of Entagen, Dr. Bouton worked as a computational biologist at LION Bioscience Research Inc. and Aveo Pharmaceuticals from 2001 and 2004, leading the microarray data analysis functions at both companies. In 2004 he accepted the position of Head of Integrative Data Mining for Pﬁzer and led a group of Ph.D. level scientists conducting research in the areas of computational biology, systems biology, knowledge engineering, software development, machine learning and large-scale ‘omics data analysis. While at Pfizer, Dr. Bouton conceived of and implemented an organization-wide knowledgebase called Pfizerpedia for which he won the 2007 William E. Upjohn Award in Innovation. Dr. Bouton is an author on over a dozen scientific papers and book chapters and his work has been covered in a number of industry news articles. 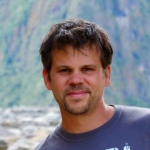