Julius J. VandeKopple has had a bass shop in northern New Jersey since 1979. He studied bass repair and restoration from 1978 to 1982 with Joseph Cilecek of Hastings-on-Hudson, NY, luthier to many of New York's finest bass professionals; and violinmaking with Karl Roy at the UNH Violin Craftsmanship Institute during the summers of 2003 to 2008. Julius is an accomplished bassist as well as a luthier, performing as principal bass in New Jersey's Bergen Philharmonic Orchestra and Adelphi Chamber Orchestra. He earned a Ph.D. in Mathematics with a thesis in musical acoustics, and served on the Board of the Catgut Acoustical Society, sitting as President at the time of its merger with the VSA (Violin Society of America) in 2004. He continues as Chair of the CAS Forum and as CAS representative on the VSA Board, and is Director of the VSA/Oberlin Bass Workshop. Julius, known to colleagues and customers as Jay, specializes in setup and repair and emphasizes development of an instrument's optimal sound. He has given presentations at VSA and ISB (International Society of Bassists) conventions on these topics. 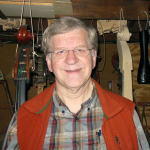