Christine Halvorson founded Halvorson New Media, LLC in 2006 to provide businesses and nonprofits with training, strategic consultation and content development in the rapidly exploding world of social media. Christine began her social media career before anybody had a name for it, when she was just a writer. In 2004, she became the Chief Blogger for Stonyfield Farm, the national organic yogurt company based in Londonderry, New Hampshire. There she pioneered the use of corporate blogging by writing and managing five company blogs. After two years as a full-time Stonyfield blogger, she created her own social media agency--Halvorson New Media--which chugged along nicely creating company blogs until 2008, when Facebook happened. And then Twitter. And then LinkedIn, and then...well, you get the picture. Christine is the author of four e-courses for the New Hampshire Small Business Development Center, all of which can be found at their website and for free. Christine also offers her own small business workshops and live webinars on advanced topics in social media. She has taught social media to communications majors at both UNH-Manchester and Southern New Hampshire University. 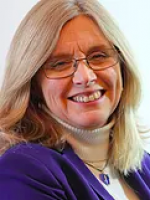